Born and bred in the Welsh city of Swansea before running off to London, Trutopia consists of two brothers Ash & Kris.

After sleepless nights spent in the studio, the boys received a big welcome to the 2018 with a charted release on Nervous Records (#1 in Beatport House releases), followed by big numbers on Cr2, Love & Other, ToolRoom, GetTwisted and more serious heat on the way on the likes of Strictly Rhythm, MadTech, Armada Subjekt, Sweat It Out, Nervous Inc & more. As well as taking over hour 2 of ToolRoom Radio with Mark Knight, Trutopia have dropped guest mixes for the likes of Mistry Of Sound, DJMag & Data Transmission hosting theyre groove ridden DJ sets people keep calling them back for. Over the last year, they have shaken up dance floors in the UK, Ibiza & Sydney, thanks to their top selections, unique stage presence and contagious enthusiasm. As well as securing premiers on of the hottest tastemaker platforms such as SubSoul & EtonMessy, you will never be too far from hearing a Radio 1, Kiss FM or Capital Xtra DJ playing one of their tunes.

The boys thought about a third activity to make their lives even more restless, and as the legend says, The Night Mayors party launched. Streamed live from the terrace or living room of their East London flat, in a villa in Ibiza or on a balcony in Sydney, this house party-like knees up has seen them play b2b sets with some of the best established and newcomers in the game, such as Tough Love, T.Williams, Mad Villains, Sirus Hood, Leftwing & Kody, Blonde, DJ S.K.T. & more. Thanks to the boy’s unrivalled talent in making a serious party feel like just a bit of fun with your pals, The Night Mayors’ reputation rose very quickly. Ministry Of Sound named it “the biggest house party in the capital”, and huge dance music tastemakers like Magnetic Mag, EarMilk, Dancing Astronaut, Data Transmission etc, gave them nationwide media support.

The brothers live by the motto, “keep it moving” & that’s what they do. 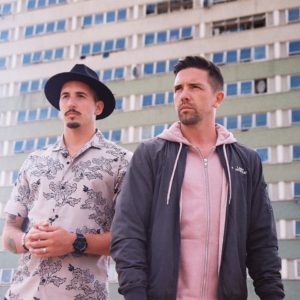 London based duo Tough Love have been at the forefront of the house scene for sometime now since they started out in 2011....
Copyright 2019 | Madtech Records
Back to top