For all those not familiar with Mr. Todd, Garry is a larger than life character (with a larger than life beard) from Sunderland (UK), who has spent the last 6 years chasing the never ending summer; DJing, promoting and living it up in Sydney (Australia) for half the year with the other half spent doing the same in Ibiza or England! Underneath his trademark California hat and Macam accent lays a talented musician and DJ ready to kick the funk out of all ahead of him! Consumed with a crippling addiction for all things vinyl and Run DMC, Garry leaves no stone unturned in doing things in his own imitable style!

But it is with his music that Garry is fast making his name as one of the most exciting and talked about production prospects around. With his first tracks surfacing on Australia’s tasty Beef Records and Leeds’ seminal 20:20 Vision label, Garry’s unique new music is gaining RAVE reviews across the board from bonefide house legends to current heavyweights and everyone in-between. His awesome “Dice Me Up” track which featured on Illusion Recordings debut release, was a funked up early 90’s disco house jam which catapulted Garry on to the global stage receiving huge industry plaudits and support from artists across the spectrum from Soul Clap to Deetron to Robert Owens, who were all sold on Garry’s infectious grooves and original ideas. This was followed up shortly after with his first solo EP (on Illusion Recordings), the auto-biographical ‘The Life & Times of the California Hat EP’ which included two special 90s inspired house cuts remixed by The Mole and Death on the Balcony that have gained him even more support from his peers with a hard to come by 4 out of 5 in Mixmag for his solo Illuson EP. Garry’s “No Giggity” track out on Solomun’s 2DIY4 label has become an instant hit with the likes of Cats and Dogz and the Diynamic crew, with DJ mag heralding the record “an undoubtedly massive tune”.

Garry’s retrospective take on house music, fashion and raving is here to stay, so all aboard the good ship Garry Todd. This Contemporary Scarecrow is carving out his own unique path, just make sure you cross it soon! 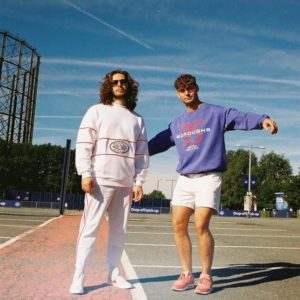 Born and bred in the Welsh city of Swansea before running off to London, Trutopia consists of two brothers Ash & Kris. After...
Copyright 2019 | Madtech Records
Back to top