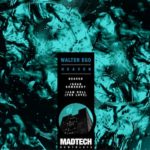 Sheffield based Walter Ego, aka Josh Gregory, has been a prominent name in the contemporary house movement in 2013, recent releases for Toddla T’s, Girls Music slotted Gregory in alongside the likes of DJ Q and Roska on the labels roster, elevating his career and quite rightly earning him a highly praised reputation.

Title track ‘Heaven’, opens the single here, a deep Garage/House crossover cut employing warm pad lines, soulful vocal lines and a playful organ hook line. Things slowly bloom in this state for several minutes before the latter half of the track sees rounded sub tones, dark stabs and an insistent shuffle in the drums introduced, resulting in a classy, understated modern house record. Up next is ‘Grab Somebody’, Gregory stays on a similar tip keeping things deep and emotive, this time cosseting Rhodes chords and jazzy hats take the lead, while penetrating acidic bass licks and heavily manipulated vocal chops meander around them, driving the melodic movement and musicality.

GET YOUR COPY OF “HEAVEN”

Copyright 2019 | Madtech Records
Back to top