Anyone tapped into the pulse or keeping score of modern electronic music has probably heard of Timo Garcia. Straddling the fine line between underground darling and big room, big tune dance floor arsonist…

…his numerous releases on the circuit’s biggest and best labels has been well documented.

In a world when DJs and producers are ten-a-penny and the hype machines peddle mediocrity as if it were something special, it can be difficult to separate the wheat from the chaff. As such, the currency de jour is consistency & recommendations…

His consistency in the studio first culminated in ‘Wonderlust Bug’; his acclaimed debut artist album with some of the world’s biggest names queuing up to recommend it… [SASHA] “The Hang Drum track is amazing – as is Release, Wonderlust and Lady Luck and the mixed album flows wonderfully too, keep it up mate”. [LAURENT GARNIER] “Great work… Great for big room business.” [TIMO MAAS] “Great album…v trippy and great variety!”. [M.A.N.D.Y.] “Solid collection of tracks. Well done!”

But talk is cheap, action stands out, and Timo comes up trumps again! His release on Yoshitoshi graced the Beatport top 10 Tech charts for well over five months with many world class DJs citing it in their personal top 10’s. His deft touch can be heard on remixes of such luminaries as Leftfield, Coldcut, Justice, DJ Pierre, Louis Vega, Robert Owens, Danny Howells and Ian Brown and he is constantly on the lookout for ways to add his inimitable sound to wide-ranging projects including a 33 track ambient album under his downtempo ‘T_Mo’ guise. Hotel Es Vivé Ibiza released two compilation CDs produced by T_Mo highlighting his chillout music production prowess and sensational track selection.

His infamy has spread among the label bosses who set the trends and create the future heroes of our worlds. ElRow Music, Exploited, Noir, OFF, Compost, Lost Records, Skint, Southern Fried, Stealth, Yoshitoshi, Nervous, Leena, Cr2 & Toolroom & even Hed Kandi are just some of the world-famous imprints who have released work by Timo. And his previous collaborations with X-Press 2, DJ Pierre, Jerome Sydenham have all hit the hallowed Beatport top spots.

In order to separate his deeper more bass driven, disco tinged productions a new moniker was needed and so in 2012, with a slew of releases on Get Physical, Gruuv, OFF Records, Connaisseur & Nurvous; NOLAN was born! A collaboration with Idris Elba on vocals followed shortly on vinyl after his chart topping single Everyday & Everynight featuring Defected star Amber Jolene had spent almost the whole year in the Beatport NuDisco charts thanks to KANT’s deft touch on remix duties. Teasing a forthcoming full album project featuring the inimitable FORREST on vocals two collaborative singles have already dropped, one on Mother Recordings and the latest on KITTBALL which features dark & driving remixes from label boss P.A.C.O. & Hot Creations duo Raumakustik.

It seems incredible that he still has time to DJ around the world as well as working behind the scenes engineering and mixing down many other artists’ projects in his Brighton based studio. Past dates saw him play the main stage at London’s biggest Dance music festival ‘South West Four’ as well as headlining festival stages from Bestival to Korea’s World DJ Festival as well as extensive tours of Brazil, Russia and India; but this is a man who has both a dedication and a love for his craft and this is something that he exudes, whether behind the decks or in the studio.

Whether you like your music to be played in the comfort of your own home, in grimy underground sweatholes, or in extravagant and celebrious locales, the sublime and sensual sounds of Timo Garcia are guaranteed to deliver. 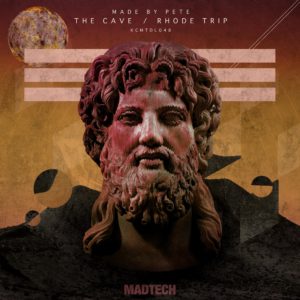 London based producer Made By Pete releases on Kerri Chandler’s Madtech records this November, featuring...
Copyright 2019 | Madtech Records
Back to top